Last year, Aimee and I ran the 40th Anniversary Marine Corps Marathon together.  I never wrote a recap about it because I didn’t really want to talk about it, forget type out words. 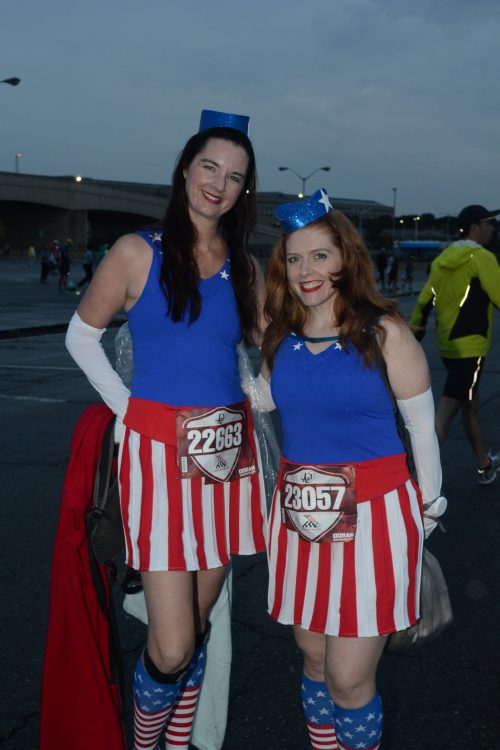 I was trained, I was excited, I was ready, I thought the costumes came out great, but my day didn’t go as planned. 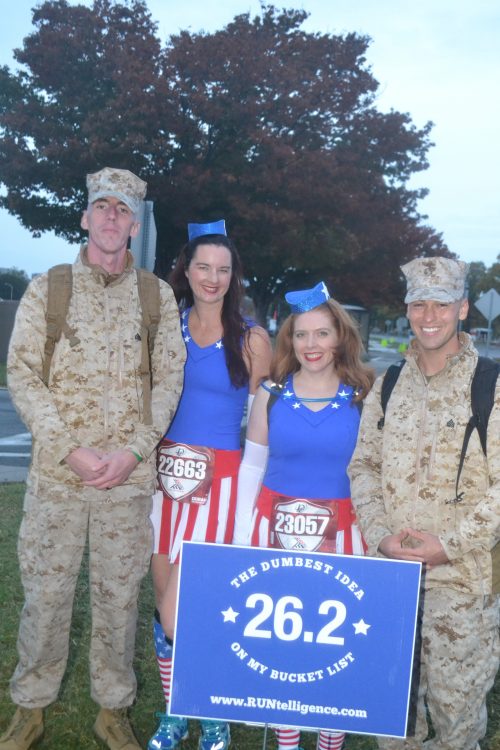 It was warmer than I like a race to be, but I tried to forget about it.  But at mile 2, I submerged my entire shoe in a water-filled pothole that made my right foot, and soon after, entire self, miserable.  I could not be pulled out of the black hole of ick no matter how great the crowds were or how much Aimee tried to cheer me up. 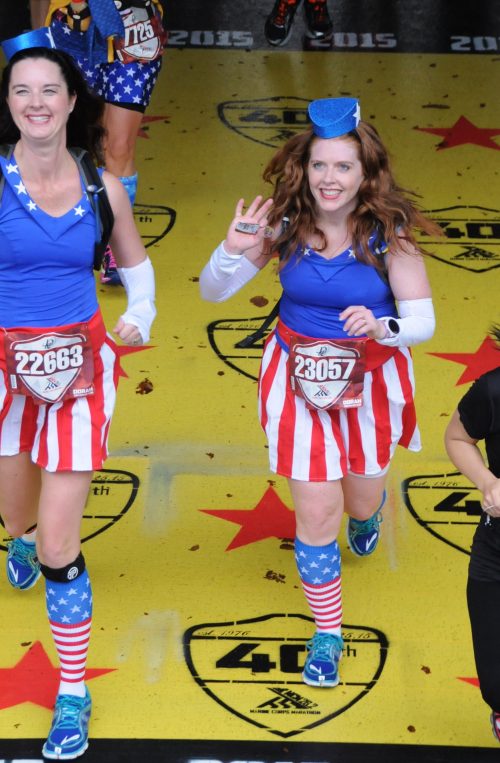 I might look happy in the pictures, but I am a hot mess on the inside.  But a year later, we can laugh about it and learn from our experience.  I now realize that the marathon is a fickle friend that demands respect.  Especially this marathon. 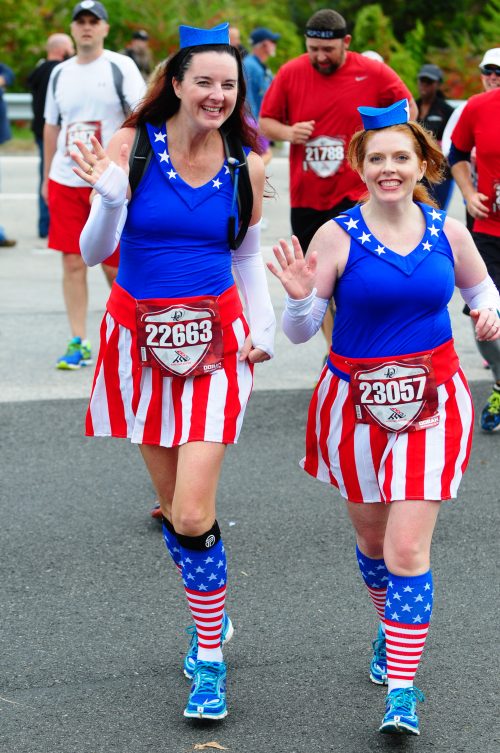 It wasn’t pretty and Aimee deserves an additional medal for putting up with my grumpy self all day.  She is faster than I am and could have easily run ahead and there would have been nothing I could do about it.  But we finished together and lived to tell the story.  I will say that I’m pretty proud of myself for getting through the tunnel of suck and not giving up (and of Aimee for not giving up on me either). 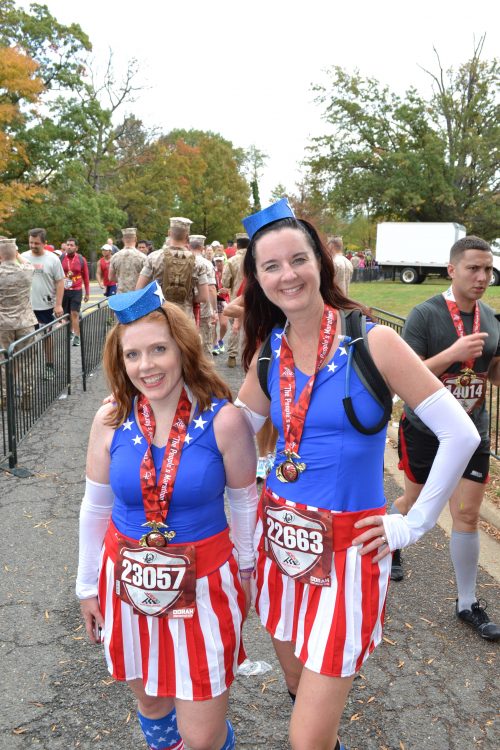 But that’s not what this post is about.  This post is about the FUN side of the Marine Corps Marathon – the SPECTATING!!  This year, Aimee got in via the lottery and asked if I could come down and cheer for her and her friend Gretchen.  Absolutely!  But I can’t just spectate.  I wanted to SUPER spectate! 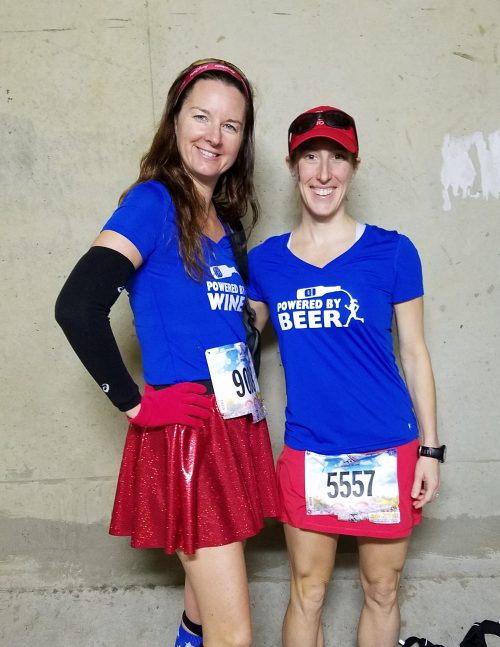 I got my plan together and set my sights on seeing them 6 times along the course at mile 1, 4.5, 9, 14, 21.5 and 26.  Mile 1 was easy; after I dropped off the girls, I hopped on the metro to Rosslyn and followed the crowd to the course.  A side perk of Super Spectating a marathon: checking out all the great costumes! 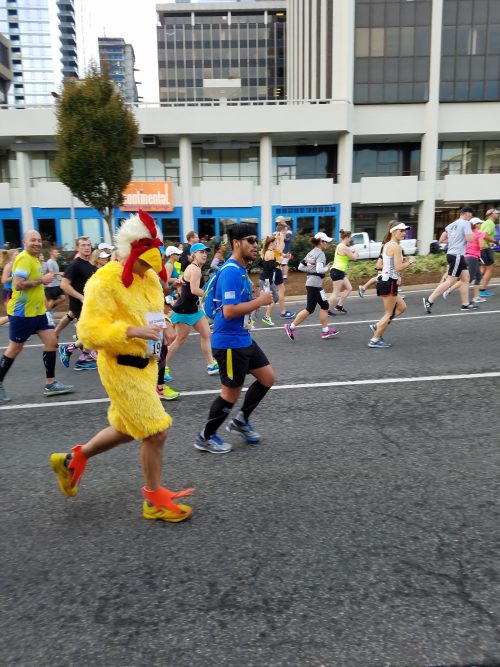 Mile 4.5 was pretty easy too. Just walk over to the Key Bridge and wait for them to run by. 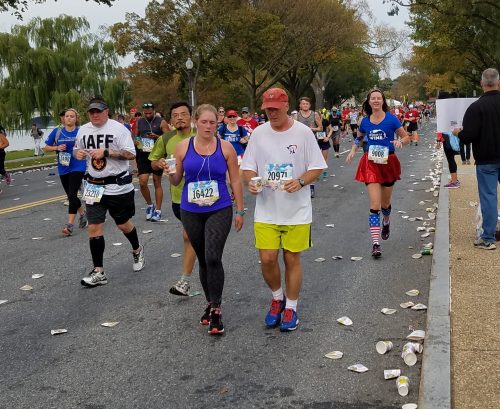 Getting to the mile 9 viewing spot involved some walking.  I took the metro to the Arlington Cemetery and walked/ran across the Memorial Bridge to the back of the Lincoln Memorial.  Then I just walked down the hill at the end of the bridge and saw them a few minutes later. 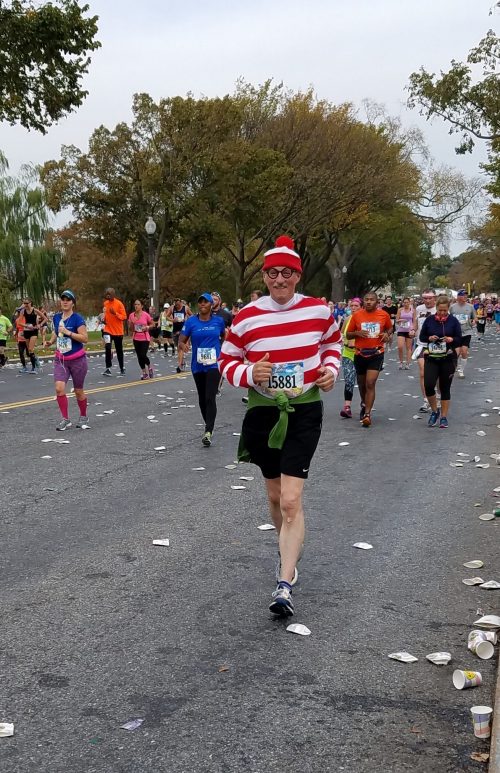 Mile 14 (ish) was just a walk across the grass, so I found a spot on the sidewalk to ring my cowbell for 45 minutes while I waited for the girls.  After about an hour, I started to get worried and then got a text from Aimee that Gretchen had to walk the rest and told Aimee to go ahead.  Turns out Gretchen’s hip was injured and she ended up having to leave on crutches. See?  This Marathon is a BEAST.  It chews you up and spits you out! 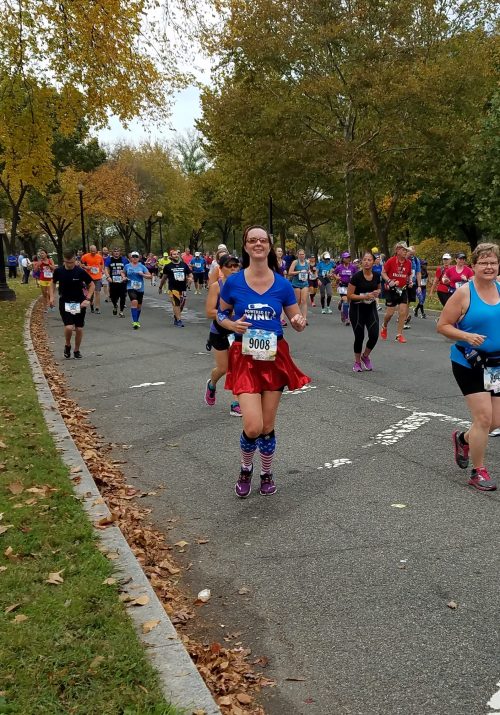 Aimee, however, seems immune to the marathon scourge that the rest of us experience so she pressed on.  I crossed the grass at mile 14 so I could see her again at mile 15, and then started walking toward the Smithsonian metro.  The original plan was to walk back to the Arlington Cemetery metro, but I did some quick math and figured I had time to see her one more time at 18 before I headed to Crystal City.  It worked out great except I had to cross the course to get to the metro station.  I made sure to RUN across when there was a nice wide opening, but I still felt like an ass doing it.  I hopped on the metro to Crystal City and made it in the nick of time to see her at 21.5. 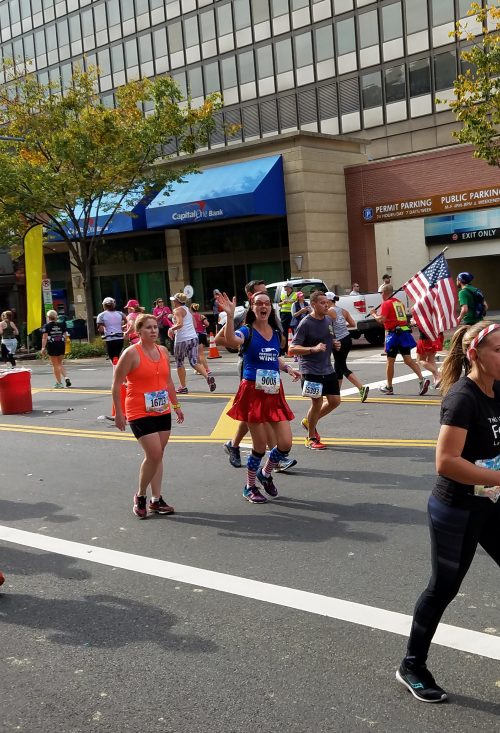 I made the game time decision to hang around and wait for her to come back by at 23 and then head to the finish line.  She was happily surprised as you can see!  Then I metroed back to Arlington Cemetery and walked until I found a spot along the last mile.  I was holding up signs all day that said things like “Don’t Trust A Fart” and “This Seems Like a Lot of Work For a Free Banana” but she said her favorite was the finish line sign that said “The Finish Is Coming” in the Game of Thrones font.  It wasn’t nearly as popular as the fart sign, but I did get a few thumbs up.  And it made Aimee laugh at mile 26, so mission accomplished! 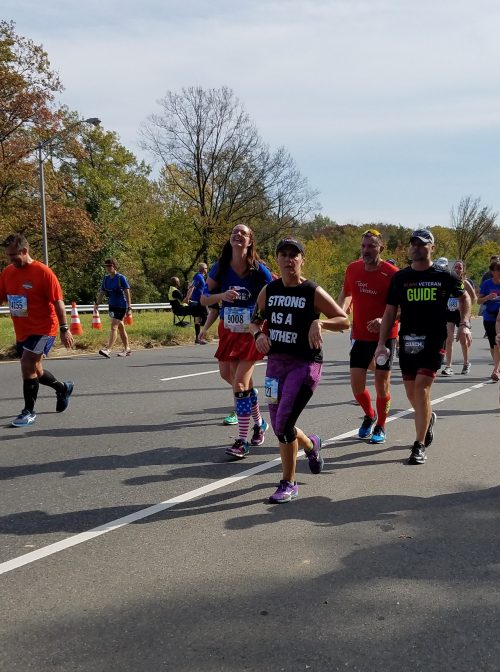 Aimee did great as always and I am proud of her as can be! 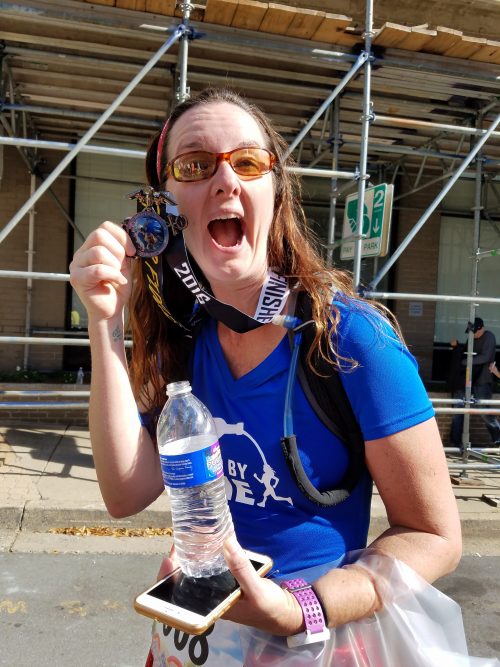 The day went so great and my plan went even better than expected. Will I run another marathon someday?  Probably.  Will I ever spectate another marathon?  You better believe it!  I had a blast!!