I’ve had the Aruba Half Marathon on my radar for a few years now, but my hubby usually has inventory at work around the time it’s held every year.  But he did so good on his fall inventory (rock star!) that he was exempt from the spring inventory this year.  We go to Aruba every November for our Anniversary, so I know the island pretty well and I knew what to expect from the course – mostly flat with maybe 2 or 3 hills and very few turns. 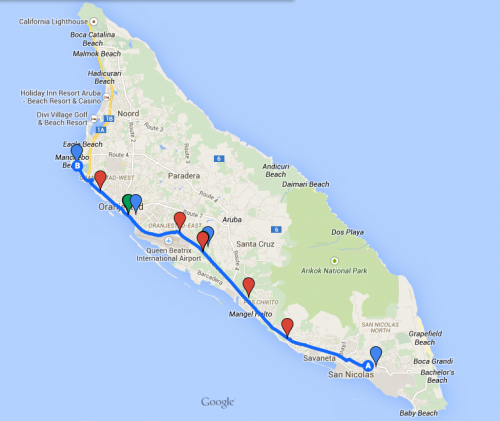 The weather is the same in Aruba nearly every day of the year, a high around 87 during the day and a low around 77 overnight, so that was easy to predict as well.  The race starts at 5:30 AM, so 77 was what we could expect.  Now, 77 is much warmer than my ideal racing temperature, but Aruba has a constant breeze, which supposedly makes it not feel as hot.  Yeah, OK, sure.

The race is held in honor of Flag Day in Aruba, which is a really big deal there.  It celebrates several events in history that eventually led to Aruban independence from the Netherlands.  And boy, do they celebrate it.  Tons of locals have an Aruban car flag waving proudly in the breeze.  Every house, business, boat, and hotel is decorated in blue, yellow & red. 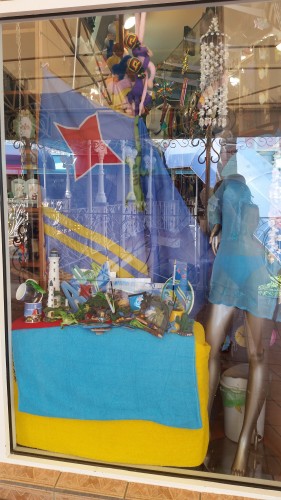 Even the cupcakes at the grocery store were decorated in the flag’s colors (I really wish I had bought some of these). 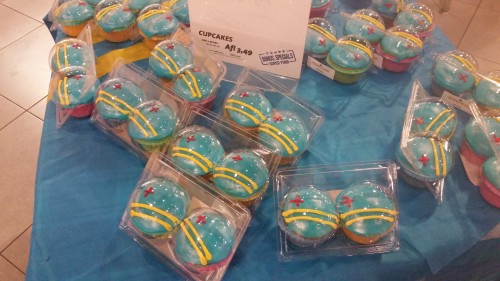 So I knew I wanted my outfit for the race to be a representation of the flag, but at the same time be respectful.  I am personally not offended when people wear American Flag attire (in fact, I usually yell out “Murica!” when I see it), but their flag is really important to them, so they may feel differently – you never know!  But the locals loved my dress and several of them gave me compliments and told me I looked very patriotic. 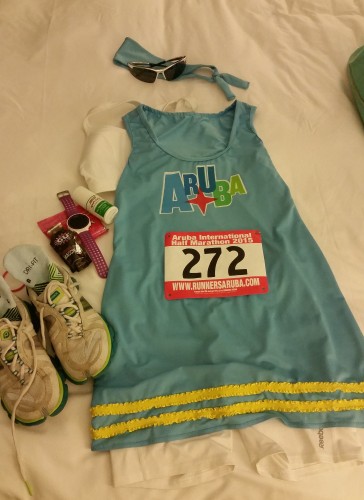 I used the ever-versatile McCalls 6559 and some (really nice) quick-dry performance knit from Joann’s.  I would have made it a tad longer, but they only had .92 yards of it left at my store.  At least that qualified it as a remnant, which made it half price and under $7!  The yellow stripes are just ruffled elastic from the notions aisle.  I made an iron-on of the Aruba logo, cut it out with my Silhouette, and that’s pretty much it!  I also made a matching headband because the winds down there and my hair are not friends. 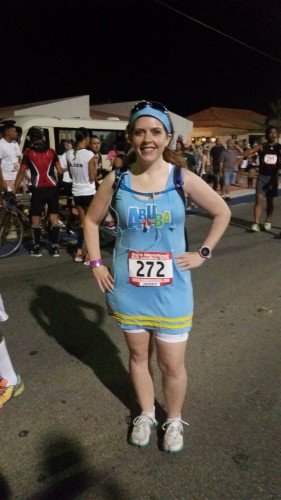 My race strategy was to do 5 minute/30 second run/walk intervals and hydrate, hydrate, hydrate.  I knew the water stops weren’t going to be enough for me, so I wore my Camelbak filled with Gatorade.  I couldn’t have lived without it.  I was parched before my first walk break. 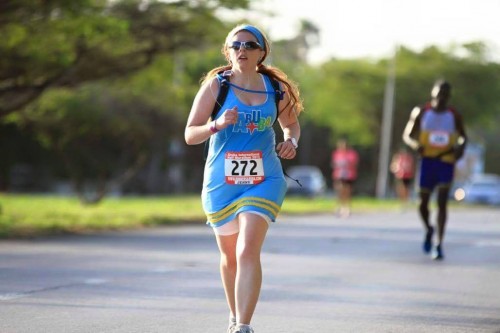 I took a nice gulp from my pack during every walk interval and took a water bag from every water stop.  That’s right: water bag.  They give you a little water sausage every few kilometers that’s sealed on both ends (the later stops had Gatorade also).  You just bite a corner off and drink what doesn’t go up your nose.  There’s no wasted water and the volunteers stay dry.  Plus, if you’re not ready to drink it for whatever reason, it’s super easy to carry until you’re ready for it.  It was actually pretty cool! 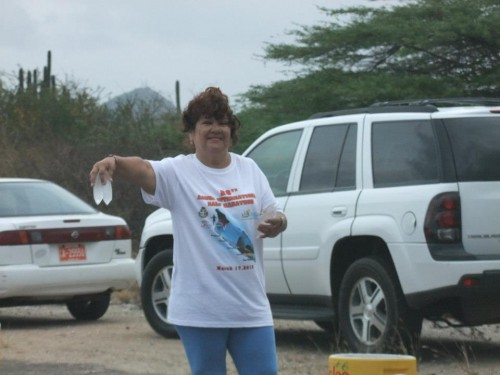 Hot weather races are usually not my thing, but this one somehow suited me perfectly.  The trade winds were at my back the whole race and they just blew me straight to the finish line in 2:22, only 8 minutes off my PR.  I guess those winds really do cool you off pretty well. 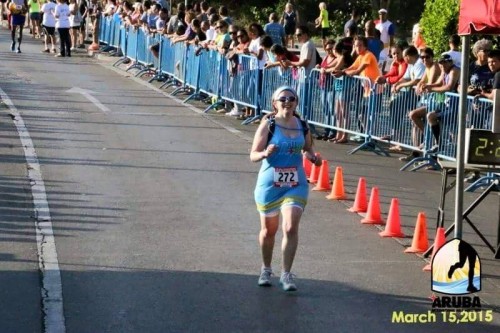 It was a great race.  The organizers were awesome at answering my (many) questions about everything under the sun before I got there, and they give tips on their website for the tourist runners to make things easier.  But I have some tips of my own that might help if you have questions that you just can’t find answers to on their website:

1. Register for the race before you get there.  You can fill out the registration form and email Ibisa the PDF to secure your spot in the race.  I believe it sold out (or came VERY close) this year, so don’t miss out!  You don’t have to pay the registration fee until you pick up your packet the week of the race.

3. The reason I’d have to carry my shirt? As far as I could tell, there’s no bag check for the race.  Just take what you need and have someone bring your post-race essentials to you after.

4. The race shirt is a unisex cotton t-shirt, so choose your size accordingly.

5.  There are porta potties at the Casino where the buses pick you up and at the Stadium where the race starts.  Bring your own TP and hand sanitizer, though.  I was on the second bus to the stadium and I got the last bit of TP in my porta potty.  There were also a few porta potties along the course at the water stops (and lots of bushes if you don’t make it to the water stops, haha).

6.  If you’re a thirsty runner, bring your own fluids.  There are water stops at 5k, 8k, 11k, 14k, 17k, and 19k, and only some of them have Gatorade.  I used a Camelbak filled with Gatorade, but a handheld probably would have been fine.

7.  If you’re staying in the high-rise hotel area, arrange a taxi to the Casino before you go to bed on Saturday night.  I don’t think you would need a taxi from the low-rise hotel area because you could easily walk to the Casino from anything south of LaCabana.  The front desk at my hotel arranged one for me for 3:45 AM and he was there and waiting for me at 3:40 when I got to the lobby.   I had to tell him my name before he would let me in so no one could steal my cab.  He told me his pickup after me was at 4:45 at the Marriott and he was taking them all the way to the start at the Stadium.  Oh, how I wish I had thought of that!! The cab fare would have been $35, but an extra hour’s sleep before a race is priceless.

8.  If your loved ones are meeting you after the race at the Casino, they will have a hard time getting to you from the high-rise area.  The only way to get there by bus is to take a North-bound bus and have them drop you off as close as they can to Alhambra after they turn around at the Ritz.  They can’t go South down Irausquin Blvd because of the race, so they will have to drop you off behind the Hospital and you’ll have to walk from there.  Therefore, tell your loved ones to take a taxi!

9.  Be patient.  They operate on “island time” there, so they may not answer your questions right away or put the results up for a few days, but they’ll get to it eventually.

10.  There is no need to be concerned for safety before, during, or after the race.  Aruba is extremely safe and you can wander around wherever you want, day or night.  The people there are SO nice and they will help you in any way they can.  So be nice to them in return!  I won’t even tolerate anyone being rude to Arubans.

If I left anything out that you want to know, just leave a comment and I’ll try to answer it as best as I can!  Bon suerte!